As part of our awareness day for second year students on the conflict in Israel and Palestine, we created a timeline of key event in the conflict and asked students to line up in chronological order. This was our result although unfortunately we are missing one photo!

On 2nd May, we had an awareness day in Mount Temple for the second years about Israel and Palestine as before the Schools Across Borders program, we had never known about the conflict so we wanted to pass on the knowledge we had gotten. Firstly, pairs from our class went to each 2nd year form and gave a presentation to them about Israel and Palestine, finishing off with a quiz.We then all gathered in Mount Temple Hall. Our YAP class had been split into groups and each group was given an activity to complete.

Fact Game
One activity was located on the stage. Myself and Darragh formed a circle with 20 2nd years and we had a foam ball. I started by saying one fact I learned today about Israel and Palestine, then threw the ball to someone else in the circle. They then had to state another fact or piece of information they had learned from the powerpoint, and pass the ball. However if someone dropped the ball, they would have to recite all the information said before them.

The aim of this was repetition, so that when they left they would have a better chance of remembering what they had learned. I was also really fun, because the longer the ball hadn’t been dropped, the more facts that were said, so no one wanted to have to say all of them.

After each 2nd year class was given our presentation on Israel and Palestine, they were brought down to the hall in groups of twenty or so, to take part in the various activity stations. The main aim of these stations were to educate the 2nd years on Global issues and create a fun, hands on environment for them to learn about what we’ve been doing over the past few weeks.

One of the activities was set up on the floor of the hall. A long sheet of paper was laid across the length of the hall and groups of 4 or 5 2nd years were brought over to sit around it. Markers, crayons, and pencils were provided in cups for the 2nd years to take and draw on the paper with. We told them to draw what being a global citizen means to them, and what they think of when they hear ‘Global issues’, ‘Global citizenship’. The activity was a success as they had some really creative ideas and it was apparent that they had learn a great deal from all of the other stations. Below are some of the things written on the sheet.


To raise awareness we painted the second year’s faces using red, blue, yellow and green. We took them in groups of fifteen and we just did two simple stripes on each side of their faces. We painted their faces because people who didn’t hear the talk would ask why their faces are painted and they would then tell them about conflict in the West Bank and The Gaza Strip. Most of the second years really enjoyed this.

During the time in the hall, two TY students took ten second years at a time down to the computer room. We brought five in and left five outside. The five in the computer room, with the help of a TY student, signed a petition about the Gaza strip to send to Eamon Gilmore, Minister of Foreign Affairs and Trade. Meanwhile, the TY student standing outside with the five waiting students briefly explained the petition and what they’d be doing.

Once all five had signed the petition, the TY in the computer room would send them back up to the hall with the other TY, who would then collect ten more and bring them down to the computer room. The five second years who had been waiting would go in and sign the petition in the meantime.

T       he petition signing was a great success. Overall, we got around twenty signatures, and we would have gotten more if there hadn’t been such a time constraint. You can sign our petition here:http://www.schoolsacrossborders.org/palestine/

In February, a group of people from our year went to Ghana on an educational trip. While there, they experienced a cultural exchange and learned about the people and their views on important topics. Over in Ghana, they saw a few things which reminded them of the Youth Action Project and global citizenship which you can see below.

A few weeks ago our class had planned to skype a class from Bosnia and talk a little bit to them about the work they were doing and what things were like over with them. Unfortunately however, there was a mix up in the timewe had arranged as the hour had gone back for the spring equinox and we ended up missing our available time slot with them and most of the class left to go to their next class.

A few of us stayed back after class though to get a chance to talk to them and we finally got through to them. Luck was not on our side though as our internet was too slow to actually skype them on video.

We decided to just message them on skype and ask them our questions through a live chat. Although the internet was a bit slow we found this worked well. We asked them about their school and what they hoped to do in the future. We found out that their education system is different to ours, with students taking classes like pediatrics and even gynacology. They asked us some questions too and overall it was very interesting to talk live to this class in particular because they were the same class that we had sent our surveys too.

We talked for about forty minutes before we had to leave for our next class, but it was definitely worth our while as we were able to understand that they're normal teenagers just like us and that they shouldn't be stereotyped just because their country has had some troubles in the past.

The people in our class that were Skyping with the Bosnians.

The Bosnians we were Skyping with.
Posted by Unknown at 01:51 No comments:


This map illustrates very effectively the political divide that was present in Ukraine prior to the recent conflict. The Blue parts of the map indicate where the majority vote was with Yanukovych, a pro-Russian leader of state, who was the most recent elected president of Ukraine. The yellow indicates majority support for Tymoshenko, who was a more progressive leader.
Note also the almost perfect geographical consistency of votes, with the East of Ukraine, the side closer to Russia, is majority Yanukovych, while the West, closer to Europe, is majority Tymoshenko. 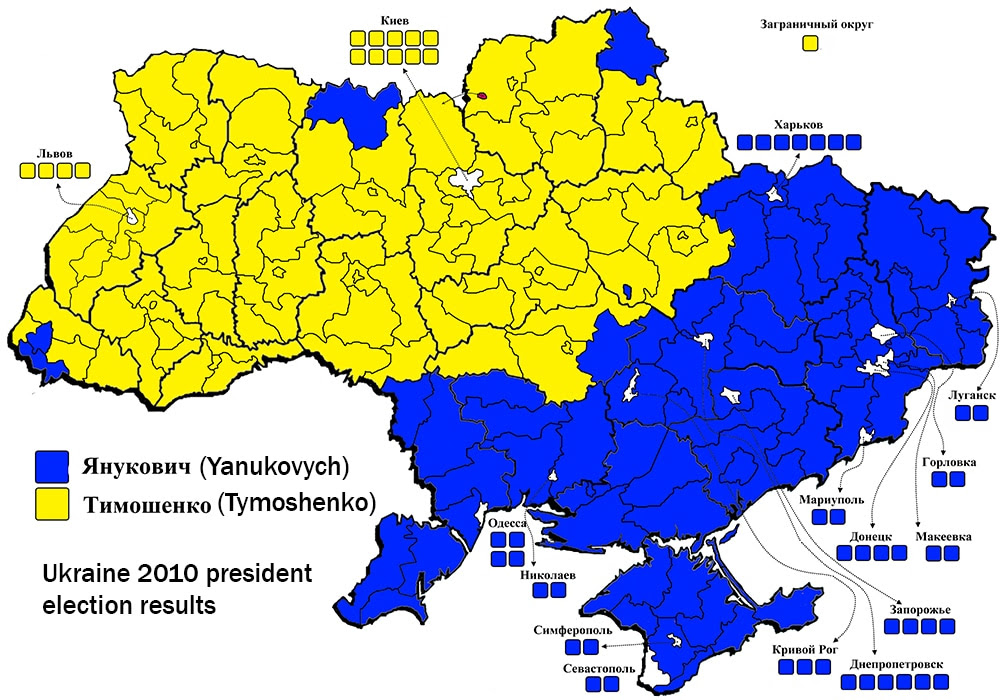 As part of our NGO, we have been distributing a petition written to our Minister Eamon Gilmore (Minister for Foreign Affairs & Trade) about Ireland's stance on the Palestinian and Israeli conflict. Along with St Dominic's school, we are trying to get to 500 signatories and would hugely appreciate your help. Below is a link to the webpage where you can read our petition as well as signing it. We would really like to raise awareness about the current situation and would hugely appreciate your help so get sharing, tweeting, blogging, etc about it!


Here are some videos we researched about current affairs and issues from countries around the world:


We will keep you updated with more material as these stories develop in the near future.